It’s usually a good idea to get a few posts under your belt on your new page, before you go off and invite people to like your page, so that invitees aren’t looking at a completely empty page.

If you can post a photo or video directly to Facebook, do so – you’ll tend to get the best response that way.

Also – pithy, deft, and satirical all tend to be good options, at least some of the time. Remember that (more than Twitter) Facebook is mostly a leisure platform used by pretty much everyone!

Actions in your area

What’s going on in your community? Are there any actions (demos, Twitterstorms, campaigns) against the Tories going on? Broadcast them on Facebook!

Are you in touch with any of your local political parties? Momentum? Progressive Alliance? Community groups? Ask around your project group to find out if anyone else has useful contacts. Post about their activities and messages on your page. Share some of their content!

Conversations in your area or community of interest

What are people in your local area, or in your community of interest, saying about the election? Your friends, colleagues, family, sports team, bandmates, classmates, housemates?

How do people you’re speaking to feel about the predictions of a huge Tory majority till 2022? What impact will that have on all our lives? What are our stories? “IT’S NOT ABOUT THERESA MAY, IT’S ABOUT US.”

Your page can become a hub for conversation in your community. Between now and June 8th, how can we come together and support each other in effective, guerilla action against the looming Tory Apocalypse?

There are many other people at home, reading and seeing and hearing the media reports, who are shouting “Fuck this!” Millions of people up and down the country are angry, or fearful, or sad, just like you!

But with the, er, complicated political situation in the UK right now, many of us just don’t know what to do to help.

Only got 30 seconds free to post something? Ask your page followers a question, as a simple text post, and invite them to respond below the line. You can ask for opinions on something topical, ask for people’s feelings about something, ask for ideas or feedback. Or you can just run a frivolous caption competition! 🙂

Your own creative ideas

#StopTheTories is a leaderless project. You’re a #StopTheTories publisher, so you have the freedom to publish your own creative ideas.

‘Topping and tailing’ is important

Whenever you post, and most particularly with a visual post (photo/meme), it’s important to think about what you’re going to write in the covering text. This can make a big difference to how strongly your readers engage with your post, which affects your reach.

That means that if you liked the covering text in the post you are sharing and you would like your readers to see it, it is often a good idea to copy-and-paste the original covering text into your covering text on the share. You can add quotes, or a credit, to make it clear the words aren’t yours.

You can maybe introduce your covering text with a hashtag, like the central Stop the Tories 2017 Facebook page often does (see an example below). 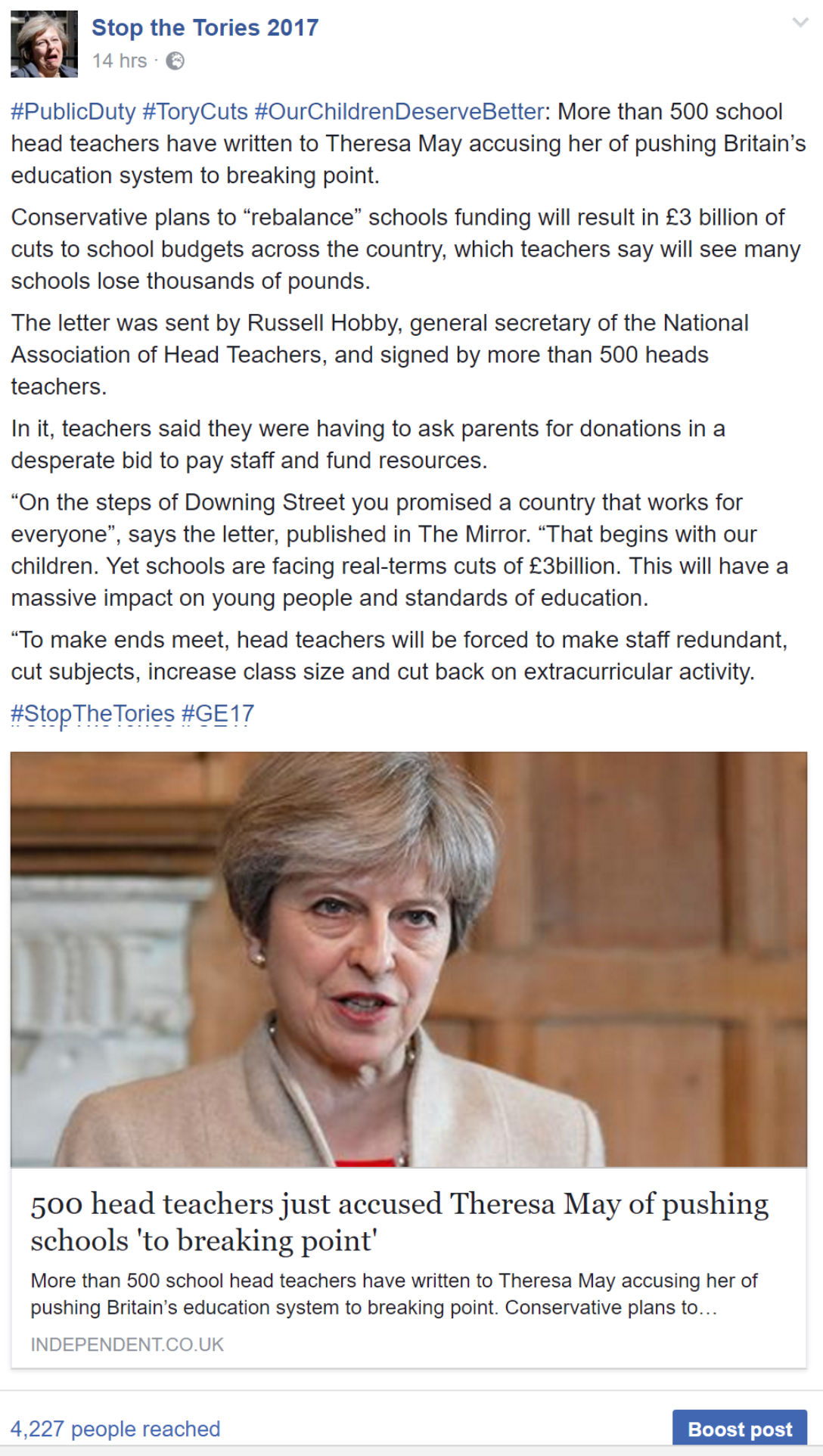 Hashtags give the #StopTheTories movement an index. Anyone interested in what we have to say can click on a hashtag to filter their search results to a single topic at a time. This may well become very useful a bit later on in the campaign!!

Here are some hashtags already used on Facebook (in many cases for the first time) by the central Stop the Tories 2017 Facebook page, that you could choose to use…

Or make up your own! Maybe you’re posting on a subject not covered on the list above, or maybe you just don’t like the hashtag already in use! It’s all OK!

It’s generally a good idea to write #StopTheToriesAnytown [replace with the name of your groups, obvs] as a footer to every post, and #GE17 (and maybe #MakeJuneTheEndOfMay) as an additional footer to everything externally focused. That means that everything public you have to say is added to the overall #GE17 conversation for anyone searching, and your own supporters and possible supporters can find everything you post by just clicking #StopTheToriesAnytown.

If what you have to post is of national interest, also use the footer #StopTheTories. 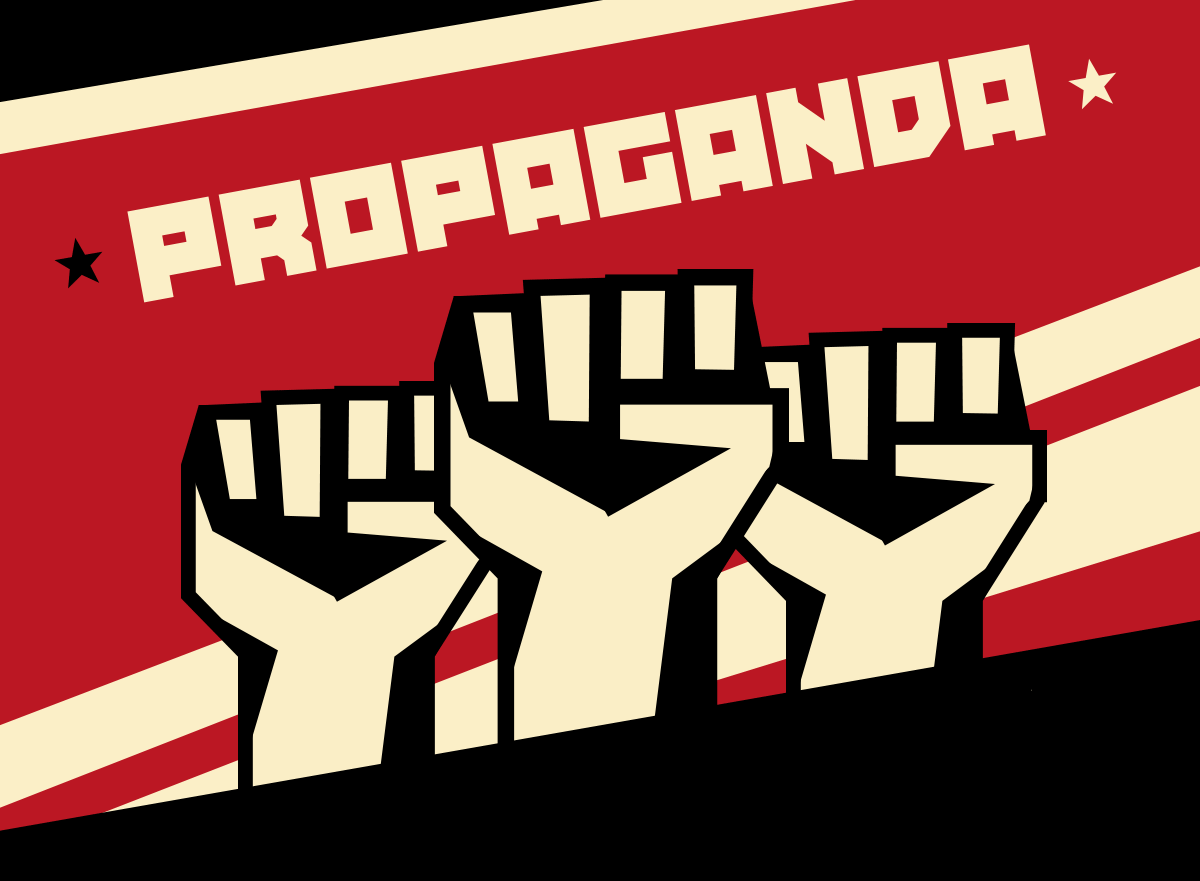 We advise that you go easy on sharing official propaganda, or other tribal messages, in support any one particular political party. The #StopTheTories message is about coming together as a Progressive Alliance and working together, focusing all our energies on stopping the Tories. There are some people who desperately want to stop the Tories, who don’t like Labour, or don’t like the Lib Dems, or the Greens, or SNP, or Plaid. We want these people to stay in our coalition, tactically voting to keep the Tories out. If we are cautious about sharing single-party propaganda, we alienate fewer people.

It’s also a good idea to consider just, erm… avoiding sounding too much like a politician in this election. Our big advantage in this election is that we can mostly speak human, and they mostly can’t. Also 52% of the population is female, when Westminster politics is hugely masculine and testosterone-fuelled. So let’s not rush to use the establishment’s framing, their very fixed propaganda methods. Let’s instead spend time finding ways of speaking calmly, honestly, human-to-human.

We suggest that you try not to always use the ‘obvious’ large news sources such as the BBC and major newspapers. Try to showcase non-mainstream media, local media (where sympathetic) and ordinary social media users. Part of our strategy has to be to dilute the power of the big media companies, who are using their great influence to ‘frame’ the election in ways which makes it very difficult for us to take on the Tories.

On the next page we discuss building your following and getting connected. [Continue…]

Legal compliance instructions
Social media video: a guide
Ideas for fundraising
Social Media Activism: Effective or Slacktivism?
Tips for leafleting door-to-door - including how to deal with blocks of flats
tagged with Build a Facebook following

About
Contact
Corrections and clarifications
Legal, copyright and disclaimers